The University of Deusto was founded by the Society of Jesus in 1886 in the context of a culturally- and economically-rich atmosphere, in 19th-century Bilbao. This city is the center of a metropolitan area with more than a million inhabitants and traditionally open to Europe. Since November 1997, the area has been significantly transformed under a symbol, an emblematic building, the Guggenheim Museum Bilbao.

The University is located on two campuses, in the two coastal capitals of the Basque Country, Bilbao and San Sebastian, and a headquarters in Madrid. As you see in the map (click here), the Bilbao campus of the University of Deusto is located at the very heart of the city, along the Nervión River and opposite the Guggenheim Museum.

The institution has around 10.000 students, 600 professors and 1200 visiting scholars. As a Jesuit University, Deusto is a member of an international network, formed by 202 educational institutions that provide a pedagogical tradition focused on the person as an essential value.

In addition, the University is striving for internationalization, without forgetting other regions within Spain, and demonstrates a clear commitment to Europe and Latin America, having signed agreements with more than 200 Universities. Approximately 1300 students and 50 professors take part in mobility programmes.

To conclude, the Bilbao campus of the University of Deusto consists of five buildings:

La Literaria Building. This is going to be the venue of the INTEGRIM-Scribani Conference (Paraninfo, Cloister and Sala Garate): This is the oldest among the buildings that make up the University. This building houses the Deusto Law School, the Faculty of Psychology and Education Sciences and the Faculty of Theology. In 2002, the La Literaria Building was declared Historical Monument. The poster session an photo exhibit “Refugee Hotel” will be hosted in the university cloister, while the documentary sessions will be screened in the Sala Garate. 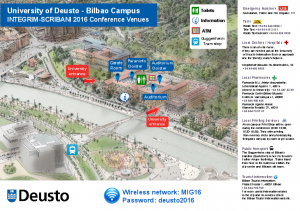 La Commercial Building: It was finished in 1921 and it houses the famous Faculty of Economics and Business Administration. In 1996, the modern ESIDE building (that hosts the Faculty of Engineering Studies) was attached to the back of this building.

The Glass Building:. Attached to the eastern side of the Literary Building, it was built in 1989 based on a project by the architect César Sans Gironella. It hosts the Faculty of Social Sciences and Humanities.

The Library (CRAI): Inaugurated in 2009, the building hosting the new Library (CRAI­ Resource Centre for Learning and Research) is a big glass cube, designed by renowned architect Rafael Moneo and made up of ten floors with individual study rooms and group work areas, multi-media room, multi-purpose rooms and a coffee bar. It is integrated into the campus thanks to the Father Arrupe Footbridge over the estuary.