In the framework of the Annual Conference, a one-day large-scale conference was organized on December 11, focusing on the theme “Fissures and Ruptures in European Societies: Masses, Migrants and Minorities.”

The conference addressed empirical and conceptual opportunities and recent explorations in understanding how migration flows, policies, and debates relate, move, reveal or clash with other important discords in society. Competitive, cooperative, transformative, or mutually constitutive relations of marked ruptures in society were explored and explained. The field of migration studies has obvious cross-currents with interdisciplinary scholarship on social inequalities, regimes of citizenship, practices of social exclusion and inclusion, and other key concepts capturing pronounced or disguised social ruptures. Similar types of encounters characterize the field of Romani Studies, whereas the two fields have generated only thin crosscurrents until now.  The conference brought together important scholars with the aim of promoting academic conversations across these two fields of studies and facilitating encounters of these two disjointed scholarly communities.

Two individuals were invited to present the keynote lectures of the conference:

1) Adrian Favell, Professor of Sociology at Sciences Po, Paris, prepared a talk on “Immigration, integration and mobility: New agendas in migration studies.” Migration studies have exploded in recent decades, without always accumulating much wisdom. Via an overview of the changed landscape of migration and mobilities in Europe since 1990, his presentation discussed how these changes have challenged established paradigms of immigration and citizenship internationally, focusing particularly on the hugely problematic conception in policy and research of “integration”.

2) Catherine Neveu, from the Centre National de la Recherche Scientifique (CNRS), L’Ecole des Hautes Études en Sciences Sociales (EHESS, Paris, France), offered the talk “Of some of the benefits to be gained from de/recentering citizenship”. The abstract of the talk she shared with the audience is as follows: «Euro-American» assumptions for conceiving citizenship have long remained out of scope, and this does have effects as to the ways citizenship is conceived of and analyzed. There is therefore a need to disclose such implicit framings. If efforts to better grasp contemporary reconfigurations of citizenship require to pay attention to other ways to define and practice it (i.e. among postcolonial minorities or in non-Western sites), they especially require us to adopt new tools and standing points from which to explore citizenship processes, tools and standing points that should avoid to subsume the complexity of citizenship struggles to one or another theoretical “model”. In other words, the much needed destabilizing work in citizenship studies is not just about enriching the picture with views and practices that challenge established meanings; it is also about adopting a political and academic standpoint that reframe citizenship in general, and clearly contextualize it. Here the simultaneous move of recentering and decentering citizenship from its agreed connections and positions proves particularly fruitful. 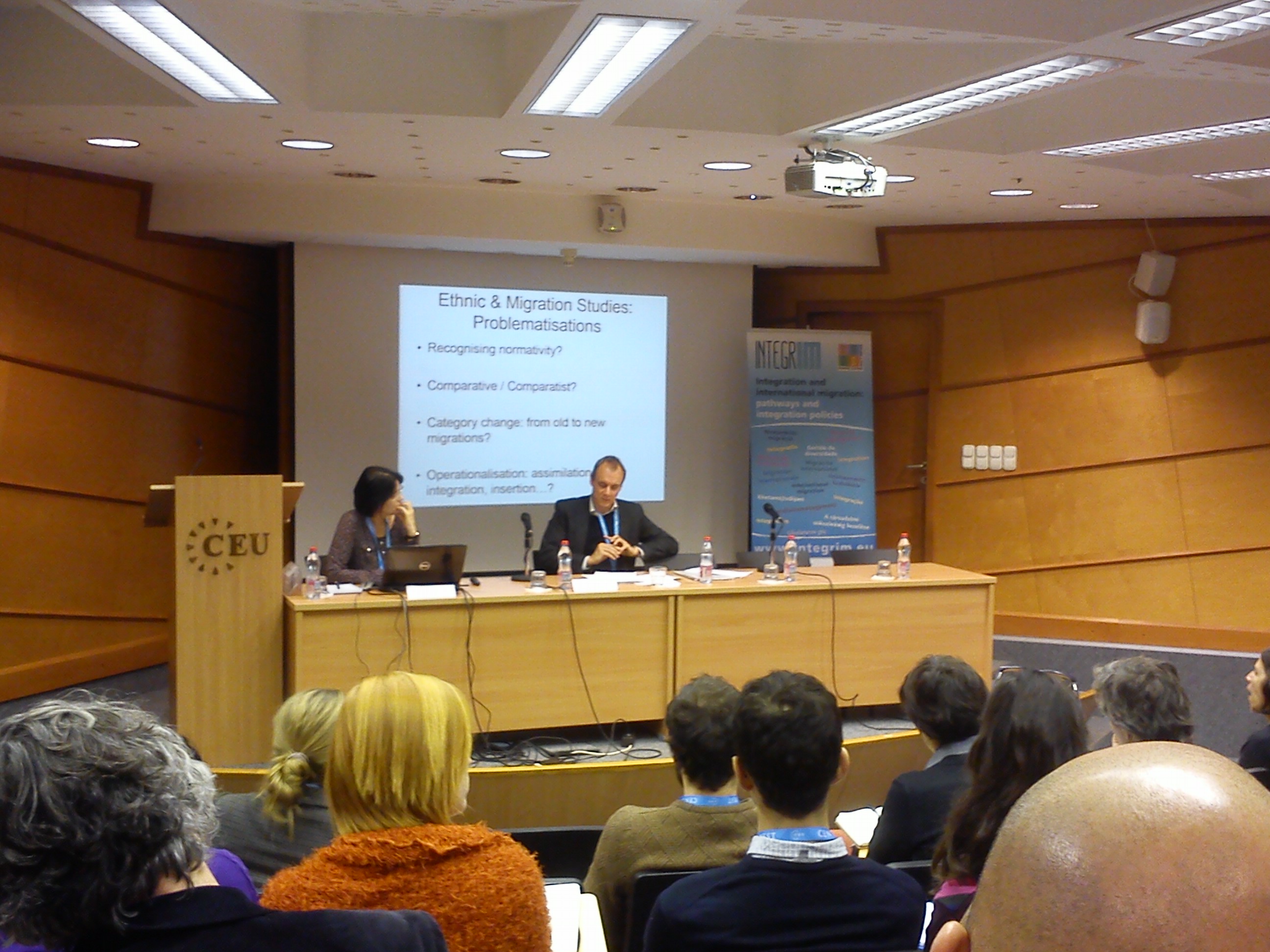 In addition to the keynote speakers, five scholars were invited to present during the Dec 11 INTEGRIM conference:

Peter Vermeersch (University of Leuven, Belgium): The Roma as a subject of policy: Frames and counterframes

The paper focused on the various ways in which Roma appear as a subject in policy-related documents. In particular, Dr Vermeersch examined how frames emerging from Roma activism – and promoted by various stakeholders in the formation of policies on Roma on the European level – are reflected in EU policy-related documents. European policymakers seek out Roma to direct social assistance their way – but the Roma are also identified as a special group when states impose immigration control or extend security measures on them. While Roma activists have pushed for the Roma’s special position and legal recognition to alleviate the stigma of ‘Gypsy’ and make them a topic of concern in EU policy debates, new counterframes, in particular but not exclusively in the fields of migration and security, have stimulated and objectified the worrisome trend to see the Roma as a social group that is completely separated from national populations and do not share interests with other groups within these national populations. 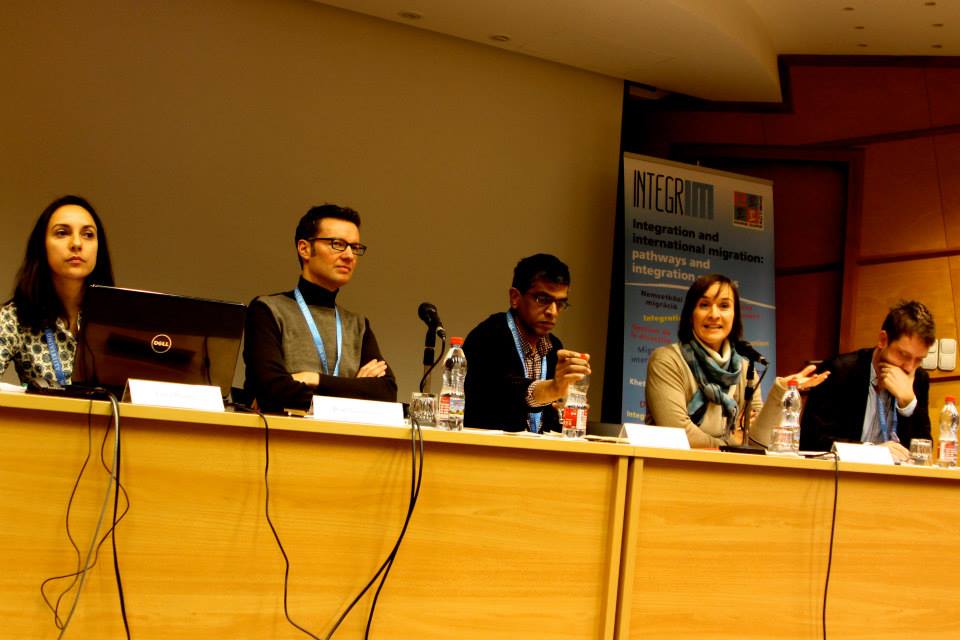 Budapest, Hungary): The political integration of migrants before and beyond citizenship

The focus of reflections on the formal political integration of migrants in democracies has often fallen onto the citizen/non-citizen divide. Certainly, in the contemporary world it would seem like the best path open for migrants to safeguard  the civil, social, political, economic, cultural rights they enjoy in their countries of residence is to naturalize: that is, to acquire the citizenship (understood as nationality) of the country they live in. Yet, this focus on citizenship-qua-membership in a national community as the only path to formal political participation obscures and deactivates the potentialities of citizenship, which has historically referred to less and more than nationality. Dr Pedroza discussed these potentialities empirically, opening up the concept of citizenship for different meanings that can be activated by migrant residents to demand formal political inclusion beyond nationality.

Migration and border scholars have convincingly argued that the Europeanization and securitization of migration and border policies in Europe have led to practices and techniques of population management that constitute a questionable divide between EU and non-EU groups, as well as between different non-EU populations. Dr van Baar built on this debate, and argued that these securitizing processes and transnational governmentalities have also impacted on the under-researched, ‘intra-EU’ divide regarding irregularized EU citizens, such as Europe’s Muslim and Roma minorities. Consequently, these minoritized, religionized and ethnicized groups have been faced with, for instance, having the adequate exercising of their citizenship – including their right to free movement in the EU – impeded. Dr van Baar focused on the position of the Roma, and on how the post-1989 Europeanization of their minority status – including the institutionalized promises for European citizenship and ‘integration’ – ambiguously relate to the securitization of migration and borders in Europe. He discussed several intra-EU mechanisms and practices of bordering and policing and showed that these securitizing processes affect not only migrating Roma – including those who have fled and asked for asylum – but also many other Roma, particularly the poor and segregated, who are confronted with both forced mobility and forced immobility. Dr van Baar argued that new border practices have increasingly been articulated at sites, such as banlieues, ghettoes, settlements, and poor, ‘colored’ neighborhoods, that are considered as ‘dangers’ to both the state project and the newly devised European project. He reflected on how the continued representation of the Roma as irregular migrants and citizens – particularly through their problematization as ‘rootless nomads’, ‘itinerant criminals’ and ‘undeserving citizens’ – has led to confronting many Roma with forced mobility and to a situation that calls into question the political articulation of freedom of movement in contemporary Europe.

The Multicultural/Intercultural (Mc/Ic) emerging controversy resides in the logic of the necessary requirements to manage a society that recognizes itself as being diverse.  The great multicultural debates of the late 20th century, and even in the early 21st century, followed a script driven by a cultural right-based approach of diversity, centered on such questions as the cultural recognition of rights in the public sphere and how to re-assess equality and cultural rights of non-national citizens coming with different attributions of language, religion, and cultural practices. This focus to diversity has founded the multicultural citizenship studies until the emergence of a new paradigm that is taking shape in this second decade of the 21st century: intercultural citizenship. Interculturalism invades this negative diagnosis of multiculturalism as a lifeguard costume. But it is also true that even if we are in an “intercultural turn”, there is still no political theory founding this turn. It is within this framework that Dr Zapata-Barrero explored the building blocks of a preliminary theory, having Europe as main contextual framework. According to him, to look for the foundation of interculturalism we need to identify some substantial criticisms of multiculturalism that has been deployed this last decade. Dr Zapata-Barrero entered into this foundational frame of discussion taking citizenship as main focus. 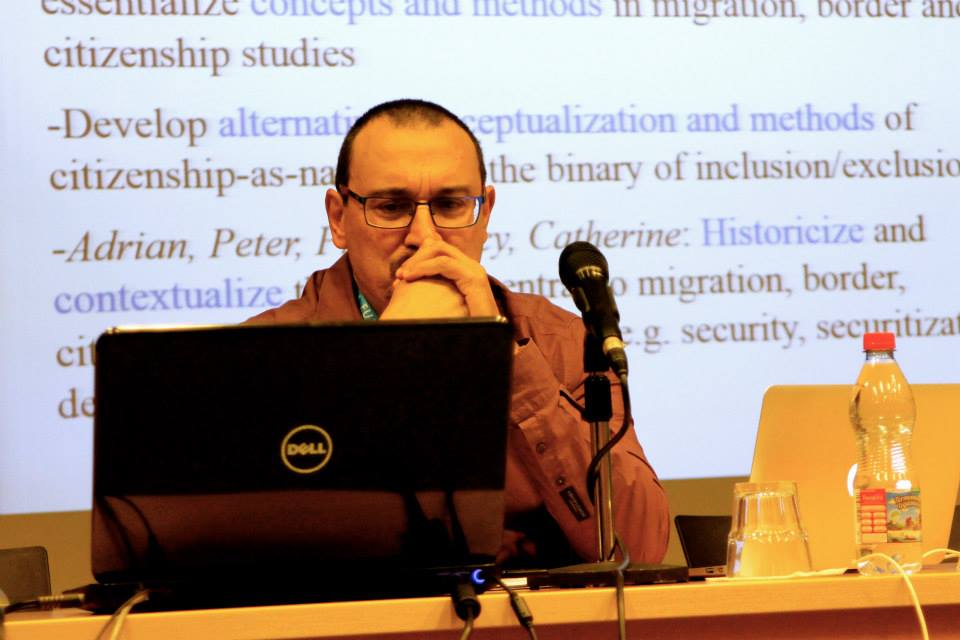 The Dec 11 conference was planned, designed and convened by Viola Zentai, Director of the Center for Policy Studies at Central European University. At the end of the day, Paul Statham of the University of Sussex offered the final session reflecting on the themes and currents of the talks and presentations offered. Sonia Gsir (University of Liege, Belgium) and Lucinda Fonseca (University of Lisbon, Portugal) facilitated by chairing the morning and afternoon sessions. Floris Vermuelen (University of Amsterdam, Netherlands), Michael Collyer (University of Sussex, UK) and Dolores Morondo Taramundi (Deusto University, Bilbao, Spain) contributed to the sessions by acting as discussants for the presented talks and papers. The conference greatly benefited from the participation of the senior scholars from the INTEGRIM Network, and was attended by an international audience of approx 100 participants. 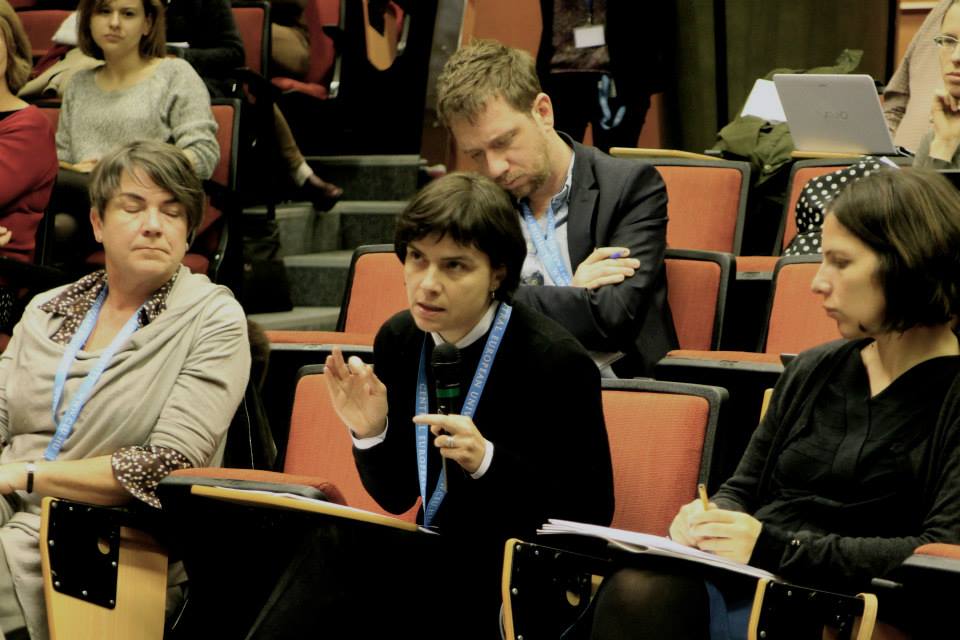 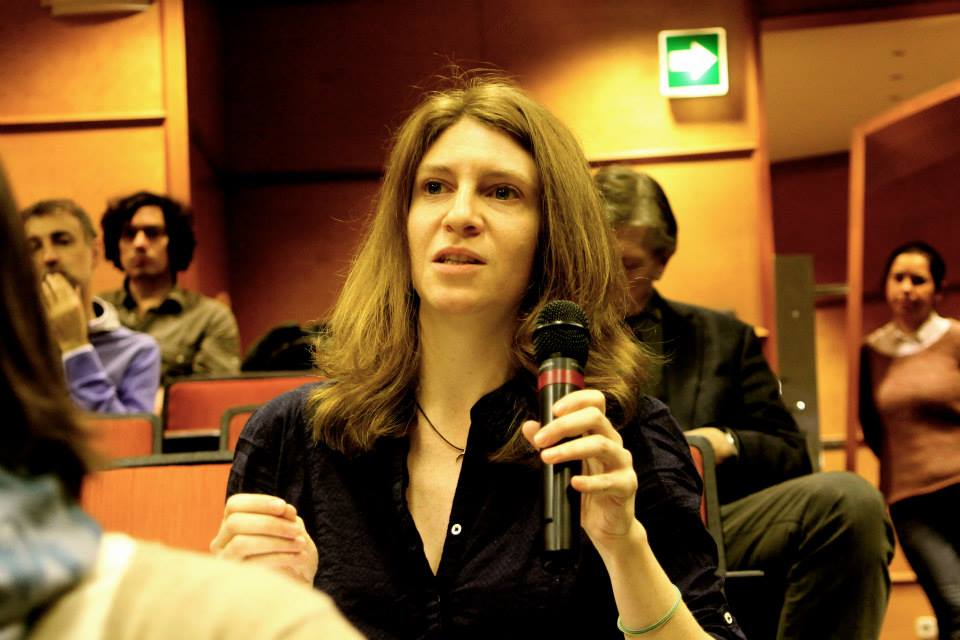 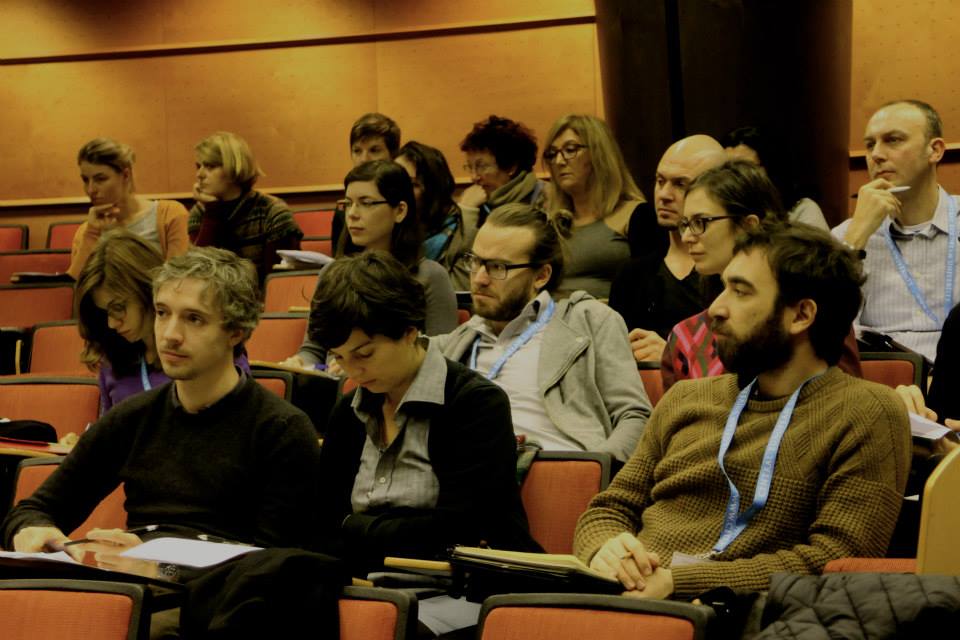