Come to the launch of Nightshift Spitalfields, a short documentary about the hidden migrant night workers of London! As anthropologist I have been working the graveyard shift for eight months to study the hidden lives of migrant night workers in London’s largest fruit and vegetable night market, the New Spitalfields, Leyton. The film is one of the outcomes of this study.

The event is co-hosted by Nightworkshop and Migrant Voice and will take place on Wednesday 19 February 2020 at 6pm – Migrant Voice, VAI, 200a Pentonville Road, London N1 9JP. Email info@migrantvoice to book a place or for more information. Free admission

In this 10-minute documentary, Ali, a Bulgarian-Turkish porter at the night market, works six nights a week, often on 15-hour shift, loading and transporting goods.

These nightshifts are incredibly demanding, mentally, emotionally and physically. Many workers have families, but it’s almost impossible to have a proper family life when on graveyard shift duty, six nights per week. They can’t take proper part in society, they can’t organise to improve their conditions – they are just exhausted and worn down.

These night workers are an invisible group of people who keep the city running with their labour. Those of us who sleep at night have no idea that they even exist, but without them, the supermarket shelves would be empty in the morning.

Crucially, after the end of the Brexit transition period, these workers won’t be eligible to come here from the EU under freedom of movement. And if the Government introduces the proposed work-based immigration system – requiring workers to either meet a salary threshold of at least £25,600 or a points threshold based on qualifications, English language ability and age, among other things – they won’t be able to come here at all.

That’s bad for them and likely even worse for London, which relies heavily on their labour to function as an urban metropolis.

Nightshift Spitalfields is a heart-wrenching poem of survival in a callous world. Ali, the protagonist, cannot seem to escape the hopelessness of his life–even the act of finding a daytime job seems impossible to him. The themes of invisibility, immigration, sleep deprivation, poverty and survival are ubiquitous in today’s nocturnal cities of the future. Ali however, seems to encounter all, at the same time. This short film isolates each of Ali’s encounter in an effort to canvas the traps of his livelihood. 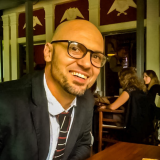 I produce research-based podcasting and short documentaries on all-things-nightwork.